I’m happy to announce that I will present some new MiKro-Labs branded designs together with BlueKitchen (http://www.bluekitchen-gmbh.com) at Maker Faire Rome 2014.

I partnered up with Matthias Ringwald, the author of BTstack <(http://www.btstack.org>) to create some BLE Shields which are running his Low Energy part of BTstack. I have not dropped support for Bluegiga based shields. They were not yet finished in time. There is a BLE-Shield v3.0.0 based on a BLE113 and a v3.0.0 Long Range using the BLE121LR in preparation as well as a new BLEBee using the BLE113 as well in preparation.

Moreover there will be an Arduino clone using a BLE112 module where not only the BLE112 modules firmware can be updated OTA but Arduino sketches can be programmed directly on the iPad and the Arduino sketch is transferred to the ATmega328 OTA as well. No photos yet, but I will update you during the next weeks with more information about these upcoming products.

Matthias and I have created two demos showing BTstack running on an Arduino (Mega) and the MiKro that is equipped with an ATmega1284p. The BTstack on Arduino demo illustrated in the picture below shows BTstack running as BLE Central (left) and as BLE Peripheral (right). The Central is connected to a potentiometer which transfers every reading as “write without response” to the peripheral. The Peripheral is connected to a 24 LED NeoPixel ring which is set to the potentiometer value of the central. Is is a simple demo but shows that a Arduino based peripheral can be  accessed from an Arduino based BLE Central easily. 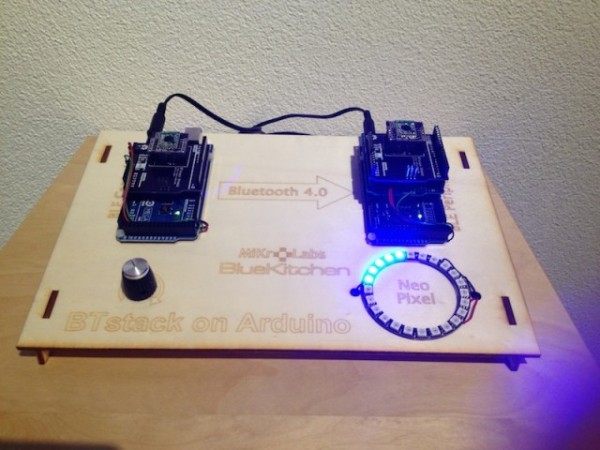 Another demo we are extremely proud of is the BTstack ANCS demo. An iPhone is connected to the BTstack ANCS setup running a MiKro which shows the latest notifications on a display. This setup can be used to create easy Arduino based Smartwatches. 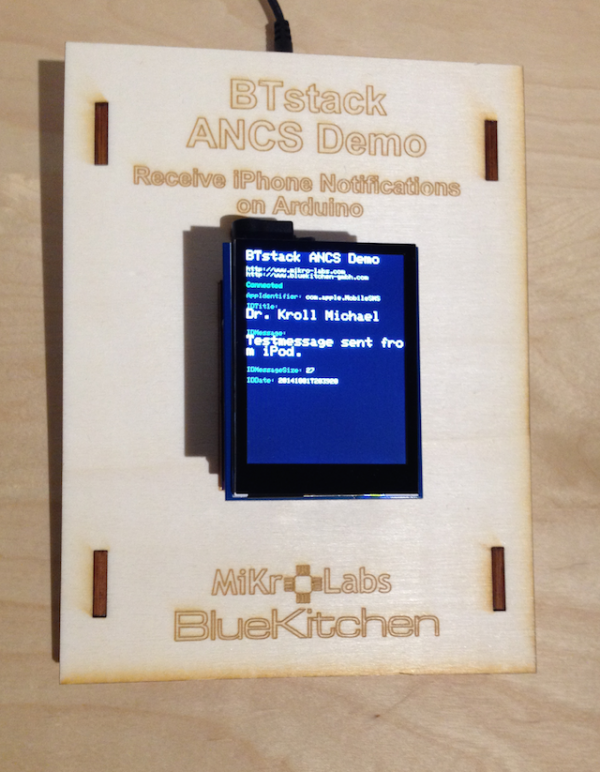 If you are visiting Maker Faire Rome 2014 meet me and Matthias during the exhibition from October 3rd to 5th and see the demos working and discuss the details of the implementations in person. We are located at the IoT Zurich Showcase (Project 124) After the faire we will provide more information about the BTstack Shield and the Arduino BTstack port at http://www.bluekitchen-gmbh.com and http://www.mikro-labs.com.

Thank you for reading,